There were over 80 supporters of the No Dam in Brownhill Creek campaign who packed out the Mitcham Council Chambers on January 31st 2012 for a deputation by Ron Bellchambers. The No Dam petition with over 5600 signatures was also presented to the Elected Members. Thank you to all those who signed the petition, collected signatures, and who came along to the council meeting. 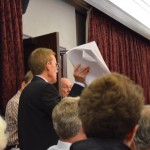 Ron Bellchambers making the deputation to the Mitcham Council 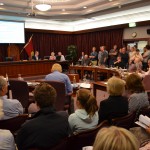